This nudist play can wreck a nice beach

Here’s a picture illustrating a simple problem that humans find utterly trivial to solve but computers and robots find challenging:

I’m not sure that the cow is all that impressed, but it keeps her fed. Mooooooo!

And I’d describe the job to you like this: sit down with a big book and a six-pack of beer. The cows will eat the hay that they can reach. Every half hour or so, see if the cows can still reach the hay; if not, pick up the broom and brush it closer where it needs to be brushed. Should you run out of hay, there’s more round the back. In a nutshell: make sure the cows can reach the food.

Now try and make a robot do that. With AI. It’s tougher than you think. The robot’s AI won’t be smart enough to look around, figure out what needs to be done and do just that, instead it’ll need to follow some set of rules that ensures that it doesn’t make the cows starve. Inevitably, this makes for a big, expensive robot that runs into all sorts of problems performing its job. Many of the inefficiencies it exhibits are because it can’t see:

Even so, it represents excellent value because it frees a human from regularly interrupting their normal day in order to go and check on the cows. With the robot generally doing a reasonable job, they’re freed up to do longer more complex jobs. The robot, of course, can’t do any other jobs, but it does this one acceptably so long as there are no surprises. Besides which, other than the six-pack and the book, there’s little job satisfaction in brushing hay towards cows all day surrounded in the sounds and smells of what comes out of them as a result of hay going in.

Traffic lights are another wonderful example of a system that is non-trivial to get to work right, so, needless to say, they don’t. They also can’t see or think and they also just follow a pre-programmed set of rules in order to make the lights change. Sometimes they have ground sensors or other detectors to help them avoid making really insane decisions, but ultimately, they’re dumb and inefficient in comparison to a human doing the same job. This morning, for example, I sat at a set of red lights at a crossroads for nearly a minute wondering if they were broken whilst absolutely no vehicles at all came the other way. If a human had been there controlling those lights, I’d not have even had to stop. But, sticking a human at every set of lights is prohibitively expensive so we “make do” with software and automation that’s simply never going to be able to match a true thinking machine.

In Soviet Russia, computer operates you

I had the extraordinary pleasure of working with and learning from Steve Grand during the second half of the 90s. He was fond of saying that Deep Blue, IBM’s chess-playing computer, didn’t know how to play chess. It merely had a lot of data and processing power available to it. Throw it in a lake and see how smart it is then. Humans who can play chess can also play monopoly. Or invent a drinking game, play it, and then (sometimes) successfully navigate a complex 3D space in order to get home whilst intoxicated. We’re simply amazing: we’re general purpose problem solving machines. As time progresses, as we’re rewarded and punished for the things that we do, we learn how to apply one piece of knowledge to many situations: and it is this incredible ability to generalise, plan, consider and apply that sets us aside from machines. If you think about it for just a while, you’ll realise how far we have to go from where we are at this time to having a computer in a traffic light that could match human performance: a machine that could reach very high efficiency regardless of what surprising, unplanned and unknown circumstances arise.

Machine learning and Strong AI (Artificial General Intelligence) are real big right now. Lots and lots of money is going into them both directly and indirectly and quite rightly so: it has long been understood that solving this problem transforms our lives overnight, forever, in ways we can’t even begin to imagine. Frankly, even the ones we can imagine are comprehensive game-changers. Combine this stuff with 3D printing, mobile super-high-bandwidth access to the global network (which will KILL WiFi hot-spots, you mark my words) and our lives are going to be simply unrecognisable in fifty years.

The future? Yes, more of the same – but cooler!

Humans are really poor at predicting the future long term which is why we think things like the Rabbit phone, WAP or QR codes are worth investing in. We tend to extrapolate2 based on where we are and what we know now: so the future will have faster cars, more spaceships, better computers, better medicine, etc., rather than being able to consider whole new technologies. Even science fiction authors, whose careers are built in imagining the amazing often get it wildly wrong. We can’t predict what we don’t know and our imaginations draw from our experience and knowledge. Those that can foresee disruptive technologies are either involved in making them or rely on the fact that if you take enough rough stabs in the dark, eventually you’ll hit something. I’m reading a book right now where in the opening few pages a future space-craft carrying hundreds of people from London to the West Coast in the USA flew there using imperial measurement units, had everybody on board smoking, was entirely male-focussed and featured several passengers rushing to use the – wait for it – video-phone booths in order to book a flying car at their destination. Wow. This was written in the mid-70s when man had already walked on the moon, but figured that 100 years down the line, we’d have more of the same rather than anything new. The author missed out the global network (the Internet), portable computing devices, civilisation finally cottoning on that smoking isn’t nice and a general shift away from furlongs, feet and miles towards a measurement system that actually makes sense… there’s more, but if I keep typing, my tea will get cold. 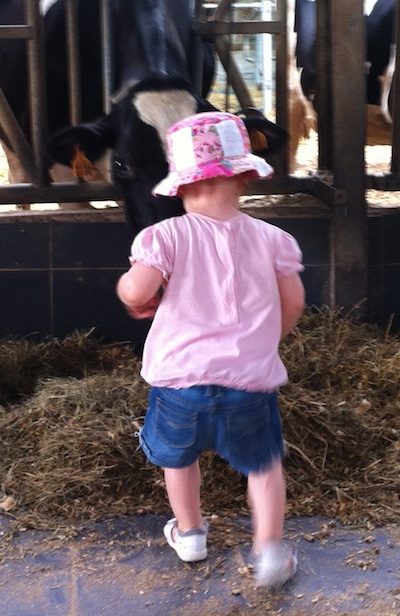 The daughter, showing the robot how it’s done. A victory dance followed.

And that’s where we are with machine learning. Trying to predict how intelligent, smart, learning machines would improve what we’ve got rather than considering how it’ll create new ways of living. You use a computer right now, but you do so with a keyboard because speech recognition is still really, really poor even though technically it’s getting good. It is poor because the speech that is recognised isn’t understood by the recogniser. Thus it isn’t able to correct itself (oh, I thought you said “this nudist play can wreck a nice beach”, but given the context, you probably said “this new display can recognise speech”). It’s also not able to isolate one conversation in a sea of others: we are experts at eliminating background noises to focus our attention on the person speaking to us, computers, well, not so good. And as a result of these shortfalls, speech recognition is a pretty useless day to day input device…

… but then you look at Google Glass (creepy, dudes, creepy) and realise that if this stuff was sorted out — if strong AI was cracked — you’d have your own smart, context-sensitive personal assistant with access to all of the world’s collective knowledge with you at all times. You’d never forget another face or name. You’d never get lost. Everything you needed to know at any moment would be right there, in front of your eyes, without you needing to think or do anything. You and your computer will talk to each other, listen to each other, share your experiences and understand each other. There won’t be keyboards in the future. Films, TV and books may tell you otherwise, but they’re wrong.

And that’s all cool, alarming loss of privacy aside.

–
1 Did that give you an uncomfortable shiver? Did it?
2 This is a cracking article. Other than the massive scare story of “everyone out of a job by 2045”, it’s a superb example of imagining the world we live in today but with smarter robots. It misses out all of the steps that go from now to then that will change the way we work and what we do. This isn’t the first time that this sort of amazingly ridiculous prediction has been made – the closed minded pessimist brigade have suggested such civilisation catastrophes are “just around the corner” now since the start of the industrial revolution. Anyway, long story short, this is bollocks.

This entry was posted in Cool stuff, They're coming to get us and tagged AI, cow, creatures, farm, machine learning, the future. Bookmark the permalink.