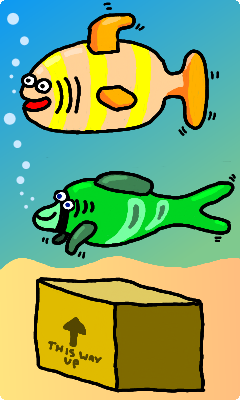 So Mrs Cobras and I were at a hotel in Montpellier recently sitting at the bar (go on, act surprised, if you can) trying, unsuccessfully, to get Baby Cobra to sleep whilst waiting for the restaurant to open. This bloke in his 60s came up to the bar and said to the barman, painfully slowly:

Meanwhile he’s frantically illustrating ‘large’ by doing a vertical version of the big fish, little fish, cardboard box dance. Then, to reiterate (mostly because he misinterpreted the barman’s look of astonishment as non-comprehension) he said: LAARRRGGGE. GLAAARRSE. WHISKY. Honestly, it was like an episode of Father Ted. This time he used the international student sign-language for drinking alongside Big Fish to ensure that the barman couldn’t possibly miss the two key elements of his order: 1) drink, 2) large. I was a gnat’s chuff away from helping out and adding the “s’il vous plaît” for him but managed to resist, mostly because I had just paid OVER SEVEN FUCKING EUROS FOR A BEER and my wallet was in a state of shock.

The barman replied, in what I thought was a class-A act of sheer genius, “Yes sir, of course. Which whisky?” whilst passing his hand along the quite respectable assortment that they had. He scored additional bonus points for speaking better English than the – now slightly deflated – customer.

All this just begs the question: how can you get to that age without knowing how to say please, glass and whisky in French? How? And why did he think that patronisation on truly BIBLICAL levels helped? And did he not realise that he looked a mammoth Nuckle-head McSpazatron1 with his dances? I have danced better than that when there was almost no blood left in my alcohol stream and this guy was sober at this point. He let down big fishes, little fishes and cardboard boxes all over the world with his feeble efforts.

Anyway, as a clearly much needed service, this third article on learning French will concentrate on what you, yes, you, need to know in order to avoid being dangerously sober the next time you are in France. Hopefully, it will spare you the embarrassment of demonstrating that a pair of testicles on a hill of springs can dance better than you can.

Since you are a discerning drinker, you will probably be sampling the wine first so let’s crack on with a brief example before delving into the details of the verbs, nouns, adjectives and other grammatical jigsaw pieces you will need in order to get utterly roasted. Oh, and don’t worry, I promise not to use any grammatical terms without explaining what they are in words that won’t require a dictionary; I can’t remember what an adverb is, par example, but I am sure that it is most important. Let’s start with a picture. Some say that a picture is worth a thousand words. They are wrong. This one is worth, oh, eight words, but it should get you started:

You almost certainly know more about French pronunciation than you think you do. When you buy a bottle of Pinot Noir, do you order pie-knot-know-ear or do you order pea-know-nwahhhh? Likewise, when you see a chav in a Renault Clio zoom by with green neon under-lighting, do you mumble something involving some bad, bad words and renn-alt or those same bad words followed by renn-oh? Lesson one, therefore, is if there is a consonant at the end of a word, you do not pronounce it. Vin, the word for wine, is therefore pronounced “vah”, not “vinn”. The only general exception to this is if the following world begins with a vowel. In these cases, you can run the two words together joining the consonant into the vowel. That sounds complicated, so let us illustrate with a petit example. “You have” in French is vous avez. You can pronounce this as two separate words “voo” -gap- “aveh” or, you can join them together and say “voozaveh”. What you can’t say is “vooze” -gap- “aveh”. So, lesson one’s appendix says “pronounce the consonant only if you are running it into the vowel at the start of the next word”. The footnote, here, is that “H” in French is not pronounced at the start of a word so bear in mind that H words tend to begin with a vowel once you have mercilessly chopped the H off guillotine style. The Americans, I understand, use this as an excuse for pronouncing “herb” as “‘erb”, but they’re not fooling anyone.

A green car, please
Of course, unless you had a terrible quantum accident and live outside of London in the 1970s, you will never order a wine by colour much in the same way that you don’t order “a green car” or go into a restaurant and ask for “a meal”. Wine, like anything wonderful in life, comes in all sorts of delicious varieties and you should make it your mission to try as many as possible. My favourite, as my regular reader will know, is castle nine-popes. (The exception to the order-by-colour is the vin de la mason, the house wine, where you might order a litre of the stuff and ENJOY IT ALL! Muuuhahahahahahahahaha!)

Now we know how to say “wine”, we will need to know les couleurs. Rouge, blanc et rosé for red, white and rose. Pronounce these rooge, blanh and rose-eh. That é sound is ‘eh’. In French, adjectives (describey words) that depict size or weight go in front of the noun just like English. But, colours and everything else go after. Thus, in French, it is a large wine red rather than large red wine.

C’est facile, oui? (It is easy, yes? C’est is an abbreviation for ça est)

So, will sir be wanting une bouteille (a bottle, pronounced ewn boo-tay) or just un verre (a glass, pronounced uh verr)? Clearly after all this effort, a mere GLASS won’t be sufficient, so let’s put this all together in one glorious order for a bottle of red wine (it is France so you are probably eating either beef or horse thus red is most appropriate):

I would like a bottle of wine red if it pleases you.

Nice, eh? Anyway, after your meal you will probably end up at the café-bar next door. You will go “for a coffee” but of course you will be drinking beer. Your excuse will, eventually, be something along the lines of “but I want to sleep tonight” or “but decaf isn’t proper coffee.” But that’s not important right now, the matter of the beers is.

Note that we have said Monsieur, not garçon as you may have seen in some woefully badly researched movies or television programmes2. Why? Because garçon means “boy” and it is incredibly, incredibly rude. Unless you want Michael Winner’s Special Sauce in your beers, be polite and use Monsieur. It translates to about 50% Sir and 50% Mr.

You may be asked if you would like une petite bière ou une grande bière. You may like to pace yourself with small (petite, pronounced pet-teet) 250ml beers or you might perhaps like to “be English” and dump 500ml down you at a go. Either way, you should know that small is about a half pint and large is about a pint. Give or take the odd twenty millilitres. “But Cobras!”, I hear you ask, “I was buying peas the other day and I purchased petit pois, NOT petite pois!” This vegetable related conundrum does indeed uncover a viper’s nest, and I would be delighted to field that question. In French, nouns (things) can be feminine or masculine. This, despite the gender related words, has bugger all to do with male and female. The army, for example, is feminine in French. However, this does have an impact with words like “the”, “a” and describey words like little, big and what nots. You may have noticed the presence of the odd “une” in the above examples to indicate “a”. Here’s a tedious table to explain all this:

Top Cobra3 tip: Not sure whether it’s ‘une’ (ewn) or ‘un’ (uhh)? Just touch the ‘u’ or ‘l’ and then say the word afterwards. If you make it smooth, nobody will be able to tell which one you used. All being well, they will assume that you got it right.

With words like little, though, that e for the feminine has a significant impact: from lesson one above, we know that petit is pronounced ‘petty’. Petite, on the other hand, is ‘peh-teet’. Oooooooo, nasty. There are some rules, but generally, you will learn from what sounds right and fortunately it is not a crime in France to get it wrong unless you’re in Paris where you might get the piss taken out of you but that’ll mostly be out of earshot. You will be forgiven. Laughed at, but forgiven. However, my takeaway advice is to avoid using the word cat or dog in any context and you will sidestep the embarrassment of getting the gender of those two mixed up (yes, the meaning does change into what you think it does… but which is which?).

Enfin, voici un tableau de mots et de phrases pour tes soirées: (Finally, here is a table of words and of phrases for your evenings out. I use ‘tes’ as opposed to ‘votre’ because I like to think we’re friends after all this time)

Next time we will look at the past tense so that we can talk about what little we can remember about our evening out on the tiles. We will also discuss what Michel Thomas calls “handles”: two verbs that you can use to get you out of all sorts of trouble by ensuring that you rarely have to remember how to conjugate any verbs; handy after a few jars, right? À la prochaine!

Les Cobras
(PS: There are other articles in this poorly researched series)
–
1 This wonderful insult is from the Spongebob Squarepants movie. See it. It rocks and it features PLANKTON!
2 Much in the same way that British meant cockney for so long in American movies
3 Well, not quite a Cobra tip, more a Michel Thomas tip that I’ve ‘borrowed’