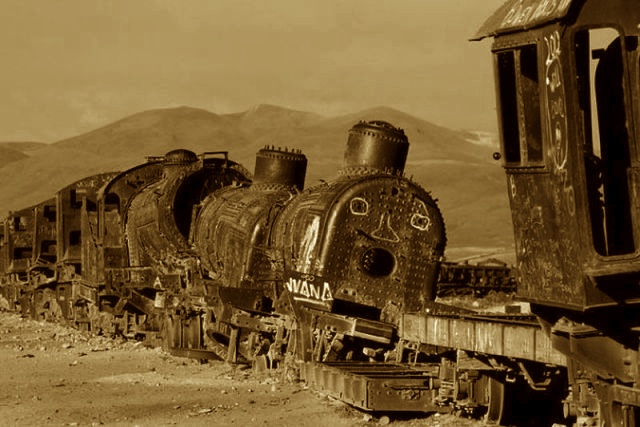 The 18:14 from King’s Cross preparing to leave for King’s Lynn. Who knows when, or if, it will ever arrive.

Duh duh duh. The sound of GSM digital phones interfering with electronics. It’s also the sound of lies, as I enjoyed witnessing on BBC breakfast a couple of months ago. They’d wheeled in a chap called Michael Roberts from ATOC (Association of Train ‘Operating’ Companies) to show as much contempt for passengers as he possibly could. I must say, he did a delightful job. I particularly enjoyed the bit when, having said his ‘phone was actually off, he reached into his inside pocket, took it out and looked at the screen whilst being interviewed. This is the kind of rudeness I last saw at a Christmas meal a few years back when a teenager listened to music on an iPod through five delicious courses and three different wines.

Oh, he played the violins as one would expect, but with no passion and energy. It would be like apologising for winning a hundred million on the lottery: it has no meaning. He must know that both the price rises and increasingly questionable service are ridiculous, but his comfy position exists only if he plays the fiddle of the railway operators and I guess 7AM is just not a good time to bullshit with style, flair and zing. Regardless of performance, though, it’s going to be a challenge of galaxian proportions to have any sympathy for the arse hats Mr Roberts represents when they are, effectively, giving vast swathes of the country an involuntary pay cut every year. But, as is the nomenclature of the age, we’re all in it together, right? After all, the improvements that nobody has seen to the service, rolling stock and rail network have to be paid for somehow. Let’s face it, in this time of economic turmoil, nobody in their right mind would possibly damage the country’s economic powerhouse by taxing its workers unless they absolutely positively had to? Well, let’s just see how together we all are:

Hmm. I see. Clearly the shareholders will be cracking open the non-generic fizzy white wine. What about salaries? Well, the CEO of First Group, Tim O’Toole received a £846,000 salary with £134,000 pension allowance and some £75,000 of benefits in kind for 2012. The boss of Stagecoach, Sir Brian Souter, received, I am sure you’ll agree, a far more reasonable £581,000 with an insywinsy £187,000 cash bonus for performance and just £23,000 in benefits in kind. It’s clear that they really are suffering alongside us. Indeed, that’s the sort of financial suffering that forces one to fire one’s butler, restrict the helicopter to weekends and stop wiping one’s arse with the hopes and dreams of one’s customers.

The really, really galling part of this is the nature with which the country’s railways were privatised. Perhaps someone can explain to me how an exclusive franchising model rather than non-exclusive licensing model can possibly incentivise companies to provide a better service? All privatisation achieved, it would appear, is to go from a state monopoly to regional monopolies with the former at least pooling buying power, engineering and knowledge to gain a half-decent economy of scale rather than syphoning too much into their own back pockets. Furthermore, having your regional monopoly guaranteed for a generous chunk of years and with no real startup costs (trains are leased so just a smart, or in some cases, utterly shite, paint job will usually do it) it is rather challenging to see how market forces and customer choice can make even the slightest fuck of a difference. And I was using binoculars. Good ones. Railtrack (just look it up and weep and if you can’t be arsed, just view Private Eye’s covers on the subject) turned out to be, from a casual observer’s perspective, an exercise in mates cashing in and the likes of First Group and Stagecoach have pretty much helped themselves to the country’s money at its peoples’ expense. So thanks, Mr Roberts, for wheeling yourself onto TV and doing your disinterested Dr Evil impression to show us all how much those you represent are taking us for a ride, albeit probably not in a seat on an air-conditioned train.

“We pay lot of taxes; we pay them in the legally prescribed ways,” [Schmidt] told Bloomberg. “I am very proud of the structure that we set up. We did it based on the incentives that the governments offered us to operate. It’s called capitalism. We are proudly capitalistic. I’m not confused about this.”
– Eric Schmidt, Google’s Executive Chairman, explains capitalism to us little people who are not in the luxurious position of running our earnings through offshore accounts for tax reasons

There are not that many people who’d pick up a wallet stuffed with a cash and take it to lost property. From that point of view – and that point of view alone – it’s possible to understand the operator’s side of things, even though as a passenger I have to be blind drunk to see it. They are, after all, doing exactly what they should do as businesses: looking after the stakeholders that matter. Given that the customers are handcuffed to the service, they can be safely ignored and the investment that would need to be applied in order to keep said customers in any ordinary situation where competition and market forces applied can go straight to the shareholders. Cha-ching, job’s a good’un. It would appear the only area of capitalism that they could polish up on for 2013 is the wholesale avoidance of paying corporation tax that our friends Starbucks, Google, Apple and Amazon are so jolly good at. In fact, the Ritz hotel has managed to avoid paying any corporation tax for 17 years! (but it’s all legal, so it’s ok, right? Way to drink the spirit of the tax law and leave us with the urine, chaps!)

Just how little a fuck is apparently given shows that the licences to print money that are issued by the government have, it would seem, virtually no passenger benefiting requirements or conditions whatsoever. Oh, and they come with a bonus ability of being able to simply walk away if it doesn’t turn out to be profitable enough (National Express, for example). I’d love to know who in the halls of power benefits from this arrangement to the extent that it is allowed to continue. Like so many commuters, I look forwards to lining the operators’ wallets with additional gold from January whilst the service collapses around me. 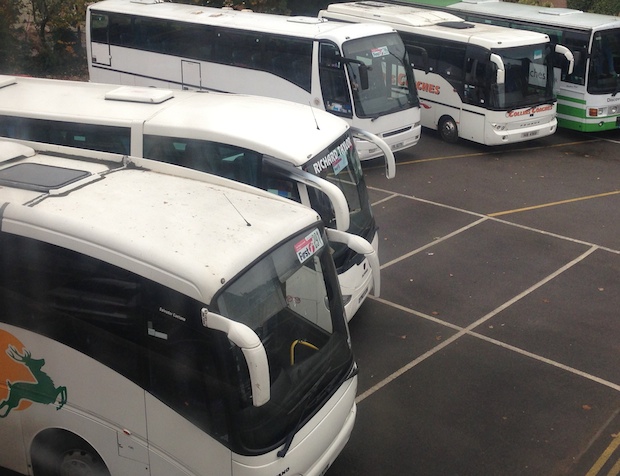 State of the art weekend trains preparing to zoom along the iron road to London.

The latest soap opera of festering pus is the argument over which flock of selfish baboons is going to run the country’s west coast mainline: the current thoroughly bailed out flexible promise makers, Virgin Trains, or the shareholder’s favourite cut-back kings First Group. Make no mistake, neither Branson – everyone’s favourite bearded hypocrite – nor Tim O’Toole at First Group give a flying flock of pigeons about delivering customer service or value for money to the taxpayers. They are fighting this battle to see whether evil tweedle dee or evil tweedle dum gets the chance to make a metric shit-load of cash over the coming 15 years with virtually no risk attached. It’s difficult to know who to back when it’s a choice between paying for a kick in the arse or a punch in the face. No competition and easy escape routes maketh a wonderful business opportunity. So far, that rolling car crash of incompetence by everyone involved has cost us, the taxpayers, 40 million but apparently, that’s the tip of the iceberg. In the meanwhile, Virgin, who said they’d run the service for free for a bit whilst this was sorted out, have stopped mentioning the ‘free’ bit now that they’ve secured a two year extension whilst this farce/disaster (delete as applicable, if applicable) is “resolved”. Wonderful! Virgin’s only redeeming gold star appears to be that if they’d not made their self-benefitting fuss in the first place, one wonders if any of this would have come to light at all. 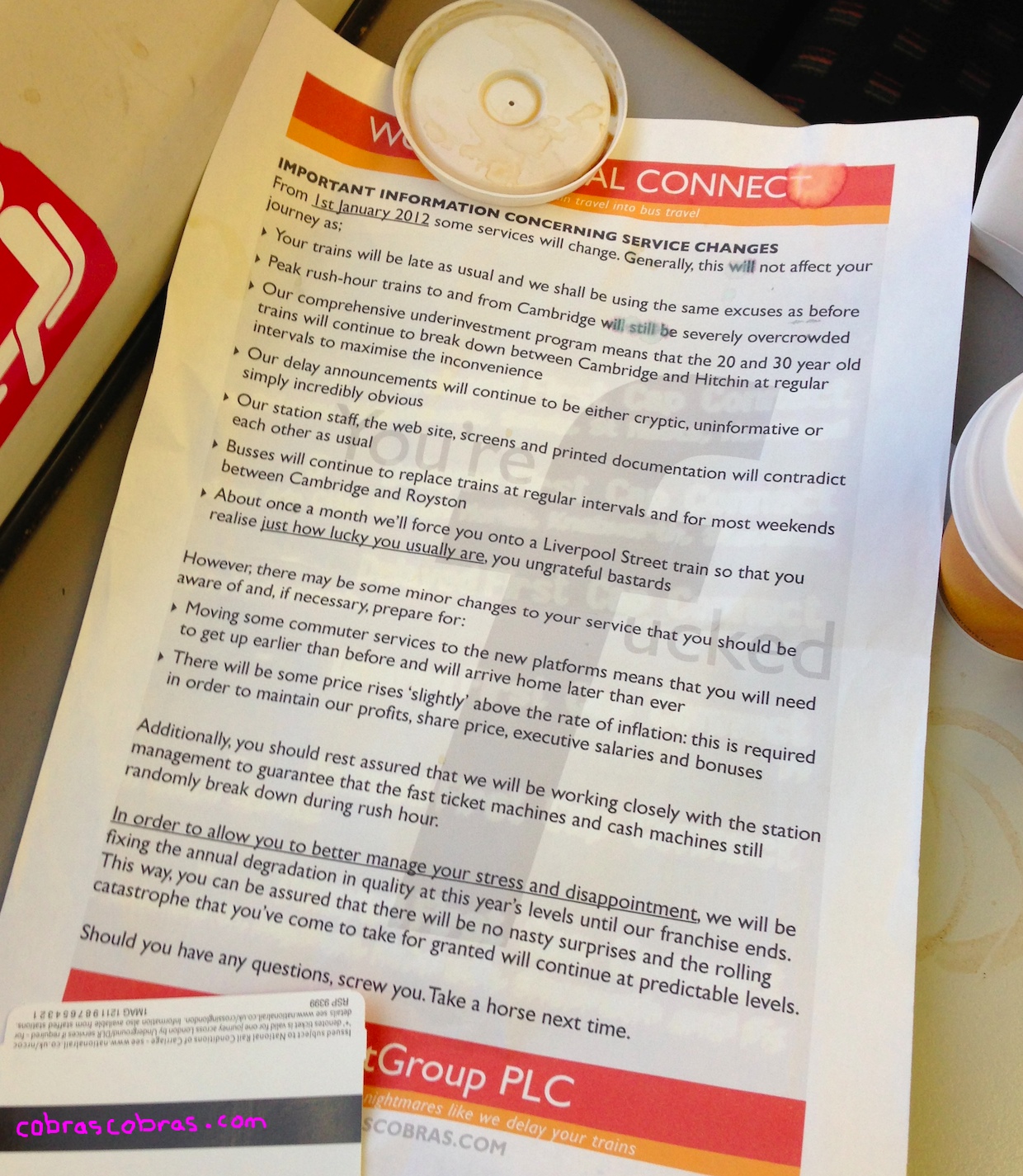 Last year’s announcement about 2012 service changes. Click for a slight embiggening. Commuters are at the edge of their seats with anticipation about what’s in store for 2013!

Even the most casual armchair general can make a good case to suggest that the railways are broken. Operators can simply make up promises to win the franchises, wring them dry and then walk away having failed to deliver what was a gargantuan task in pushing square pegs through round holes. Customers have no choice and that’s the way the operators like it: commuters have to take the train as they have no viable alternatives. There is neither an incentive nor a desire to run a top-quality customer focussed train service as the operators’ shareholders do not benefit. You’re going to get the train anyway, so why improve the service with new, faster trains? Hell, why even fix all the bits falling off the existing ones? They can dress up their investment in as many fancy clothes as they like but as the trains get older, the replacement bus service more extensive and the network falls down with increasing regularity, the theatre they put on becomes increasingly less plausible no matter how much one squints when looking at it. But the operators and their trade association are alright, though, eh? As Private Eye would no doubt say, if they haven’t already on several occasions, triples all round.

–
Minor update: of course, my second favourite web site, The Daily Mash, summed it all up so much better than I do when satirically addressing 2013’s unreasonable price rises. The commuters’ best mate Mr Roberts from ATOC, on the other hand, was available to point out that it was everyone else’s fault other than those he represented.
Also: Friend of mine found this which is worth a read for anyone travelling on First Capital Connect’s trains