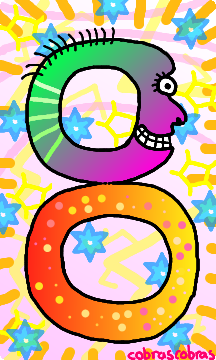 Celebreightions from the party eight!

You’d better sit down for this. Ok, here it is. I’m going to tell it to you straight, I owe you that. I won’t pussy-foot around, beat around the bush, procrastinate or generally dance around the issue. I am going to go in deep, now, and get to the point without any dilly dallying. Ok, here we go. Ready? Comfy? Could I get you a tea first? No? Right. Honestly, you’re not going to believe this. Set your face to stunned:

I have made some progress on my iPhone game.

Wooooaaah, there, careful, I did tell you to sit down. Not much progress, granted, but thanks to Baby Cobra sleep, a late train, being deserted by my train friends a couple of times (fine, they all had excuses, but I choose to feel deserted for dramatic effect) and an evening or two’s button pressing I have managed to fit in a staggering eight hours of progress. Yupperillo, that’s a day’s worth of achievement. The classic cobra-artist’s rendition of the Celebreight, to the right, is there to bang in just how magnificent this occasion is. It is, in fact, to a reasonable approximation, infinity times more progress than was made between May 2011 and the start of June 2012 so you can understand my excitement. Let’s run the numbers through the Progressatronic-6000 Deluxe Schedulometer and see what pops out:

The progress has mainly been with the map editor. This is now pretty much finished. I had to make a lot of adjustments and I rewrote large chunks of it. It’s now slim, fast, reliable and is almost certainly in better health than I am. I learnt a lot, including:

The net result of all this is something that looks pretty good. Here’s a poorly taken screenshot of a poorly designed level I was testing with recently: 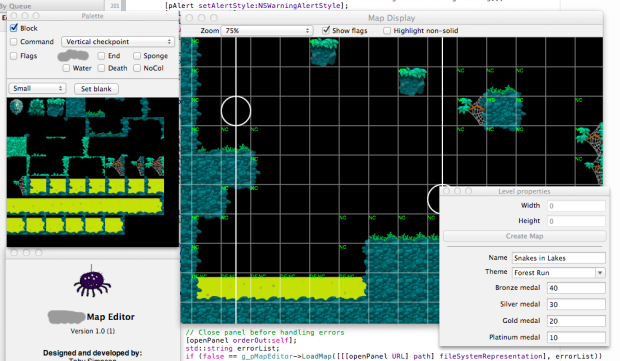 I’m not quite ready to say what the game is all about or what it is called, but soon. Of course, with my two readers, it’s not as if I’m leaking anything substantial, it’s just a… thing.

Note the class-A program icon bottom left. I drew that. I’m so proud. EGADASI2 (pronounced ‘eggadassie’) as only I say after close to the LD50 of wine.

A cake was involved

The icing on the cake (oh, and I baked a cake. Not as good as this one but any cake is a win) with this update is that the levels in this editor can be now loaded and played in the game itself. The game code was a bit messy, which is not enormously surprising given how long ago the core of it was written and what I knew about Cocoa at the time, and I’ve had to spend some time chopping down the weeds before I can plant anything nice but they are playable. I’ve fixed some issues, tidied some bits and pieces and generally brushed away some code cobwebs in preparation for the remaining features.

What are the things left before I have an actual product I could possibly stick on the App Store? Quite a lot, unfortunately:

I don’t quite know how I’m going to get all this done given I can only really pay in roast dinners and wine these days. As delicious as they both are, they don’t pay people’s bills. I’m sure I’ll come up with something, though, and it does at least feel good to have made progress and to make an update that doesn’t involve a comprehensive package of excuses.

Yey!
–
1 I must get around to creating an account there. Given how much time I spend on Stack Overflow and how important it has become it seems offish for me not to contribute on the rare occasion that I feel that I can.
2 Every Good Application Deserves A Splendid Icon