The invasion of the giraffes 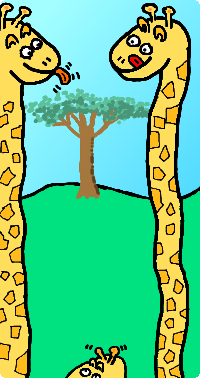 Since the baby Cobra joined us late last year, there has been a marked increase in the number of giraffes in our house. From where I am sitting, for example, I can see four giraffes – which I believe is officially a swarm – and like icebergs (the frozen water ones, not the lettuce ones) that is just a small fraction of the population that has now moved in with Mrs Cobras and me.

I believe that it is possible to work out if any given household has young children or babies simply by counting the giraffes. There is no doubt that they are as cute as big smiling bumble bees or baby unicorns (except this one, which is absolutely positively not suitable for work) and I wonder if I have missed out on the clear excellence that is ‘giraffe’ during the pre-baby-cobra years of my life. Plus, they turn out to be quite easy to draw: if I stop drawing at the bottom of their necks, they’re just vertical snakes with extra prongs on their heads. How many giraffes do you have?
This entry was posted in Miscellaneous rubbish and tagged cobra art, giraffe, pointless observation. Bookmark the permalink.

3 Responses to The invasion of the giraffes