I am learning French at the moment and have been for some time. Needless to say, due to ‘spare time’ constraints my French has made the same general progress as my iPhone game: I am regularly overtaken by snails. It is highly likely that Baby Cobra will overtake my knowledge of the language in the next few months and that is before she learns to speak.

Part of the problem is that I am no spring chicken and the other part is the way that language is taught. I prefer to focus on the latter because that allows me to blame someone other than myself and we all know how comforting that approach can be for a good night’s sleep. For over a year, I went to lessons every week and over that period I was staggered just how little I learnt. The whole language looked so bloody complicated: the first six verbs we we’re taught (to have, to be, to come, to go, to make and to want) are all highly irregular. We were taught parrot fashion and were provided with little or no useful context for what we were learning. By now, I figured that the language was utterly impossible to learn and I would never achieve it: I was doomed to speaking English loudly and slowly in the vague hope that the French would understand me. 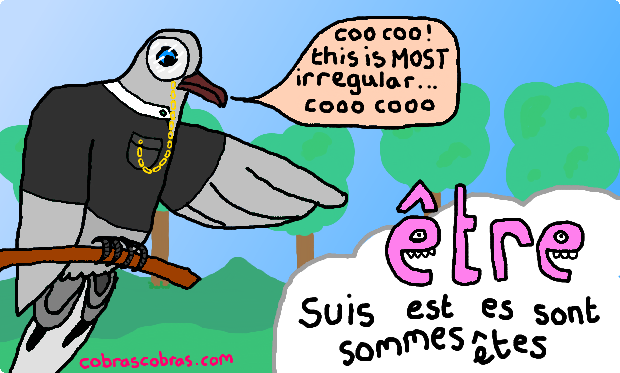 Then, someone lent me this eight hour CD set. I started listening to it once or twice a week for an hour or so and something not far short of ‘un miracle’ occurred: I started learning. Here’s the drill on verbs: those first six they teach you? They are indeed important, but they are virtually the entire collection of exceptions. The vast, vast majority of French verbs look like this:

And guess what. The ‘je’ form, ‘il, elle, on’ form and ‘ils, elles’ form are pronounced exactly the same. Exactly. And since, like me, you probably want to learn to speak the language not write philosophy in it then that is important to know. Did my lessons teach me that? No, they did not. Then there is that ‘tu’ form. It is another form of you. Do you need that at this stage? No. You do not.

Over 90% of French verbs follow the above pattern exactly. Most of the remainder follow an incredibly similar pattern. So here are some interesting verb facts that make learning French less frightening which I wish someone had told me:

Ce n’est pas difficile; it is not difficult.

As a computer nerd it is infuriating not to have been taught this basic fundamental structure. It is also incredibly annoying not to have been told that so much of French is the same as English, but with a French accent and pronunciation. It turns out that if you guess a verb or noun and pronounce it with your best comédie french accent (warm up with haw-he-haws, a croissant and a glass of red if required), it will probablement be compréhensible. If it doesn’t sound right, it almost certainly isn’t.

Next time I will bore you senseless with attempting to put my pathetically small knowledge of French pronunciation tips on paper and then follow up with how amazingly easy the future tense is and how, in fact, you need not bother in most cases: the French don’t. À la prochaine.