‘Tis the season to eat chocolate: The Universal Cake Recipe

Easter is pretty much here which means spring has sprung and nature is giving birth to a wonderful display of green. 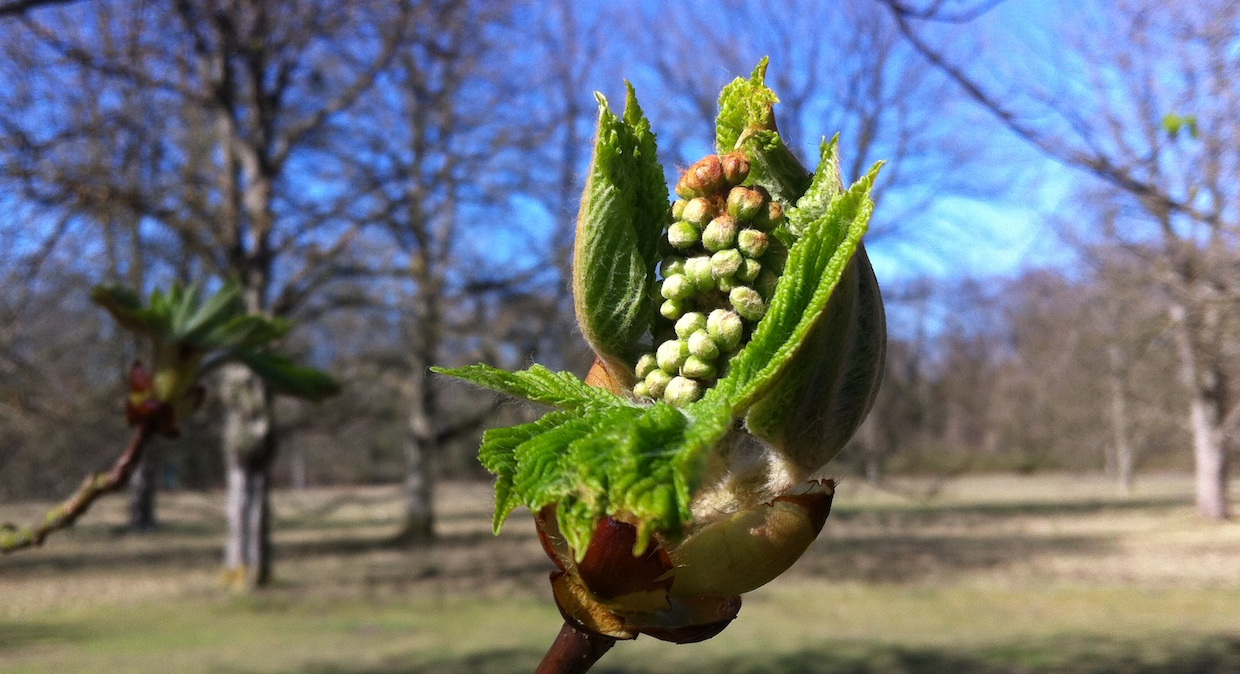 This one looks quite good, but you should see the other 40 pictures I took whilst I tried to hold the blasted branch still enough to take a picture of it with a bloody phone. Click for a slight embiggening.

As we all know from Wikipedia, Easter is when we celebrate an event that occurred two millennia ago when a Greek tourist tripped over a carpet in a Rome museum and knocked over and destroyed a pyramid of nearly a thousand chocolate Fabergé eggs worth over a billion Sestersii. Three days later, a team of master Roman chocolatiers successfully assembled enough eggs for the exhibit to continue, but as Cicero exclaimed “the Greeks will be paying this debt for twenty centuries or more”. Even now, over two thousand years later, no museum accident has come even close to the scale of the Rome incident and it has become traditional to mark the occasion by eating chocolate eggs. Indeed, in Italy, so important is the event that it has been illegal not to eat chocolate at Easter since the 1854 Antiquities Remembrance Act. 1854, coincidentally, is when Russia launched the first ever artificial satellite into orbit. Well, it was according to some children on the telly this morning quite clearly demonstrating the need for a good education. Incidentally, the other team on the same program guessed 1996. Even the presenter couldn’t keep a straight face, so outrageous these suggestions were. We don’t need no education, right? 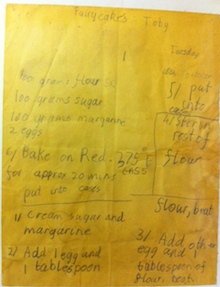 Anyhow, there is no law that requires chocolate to be eaten in egg form so perhaps you would like to consider a cake. After becoming overwhelmed by literally one request and as a service to all mankind, I pull back the curtains on the recipe for…

THE UNIVERSAL CAKE THAT EVEN A FIVE YEAR OLD COULD MAKE.

I know this is a fact because I made it at that age according to the original blueprint to the right. I make no apologies for the appalling organisation of this document, I was little.

Right, let us get cracking. I will assume that you have a kitchen with an oven in it and some basic utensils and tools such as a mixing bowl, wooden spoon and a set of scales. If you don’t then shame on you. Go out and buy them. I would show you a picture of what a Pyrex mixing bowl, some scales and a wooden spoon looks like but frankly… call your mother if you need help. It’s probably about time you did anyway.

Now for some ingredients. Let’s first get a sense of scale. Here is a fucking delicious chocolate cake I made a couple of weeks ago. 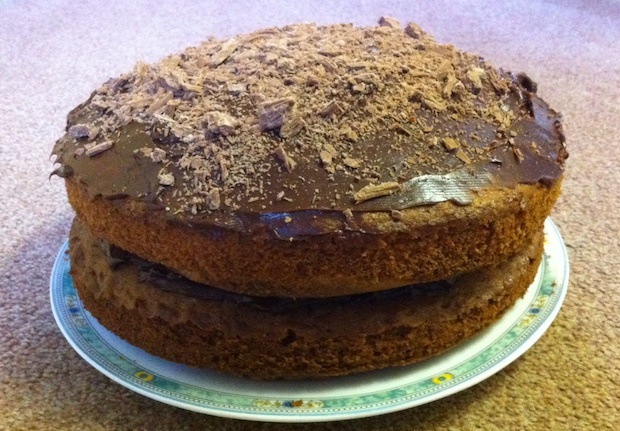 This cake is huge. It weighs the same as a MacBook Pro. The ingredients listed here will make this cake with various leftovers. Honestly, if you can’t make a delicious cake from this mix, you suck.

If you want to “chocolate it up”, which of course you will, then get some cocoa powder. You can also add coconut, ground almonds, dried fruit, food colouring or even bees if you wish.

How accurate do I need to be?
When I say 200 grams, do I mean it? Well, to within 10 to 15% or so, yes. So don’t worry yourself about a few grams here or a few grams there. Life is too short. Worry instead about how much fruit you’re going to have to eat and how much exercise you’ll need to do to repair the damage your cake is going to do to your organs.

Here is how this recipe works in summary: it’s the egg’s weight in flour, sugar and some buttery stuff all mixed together and cooked at 200 degrees for a “while”. It’ll take you 10-15 minutes to make the cake mix and 22 minutes (for mini-fairy cakes) to around 40 minutes (for a whopping über-cake) to bake and 10 minutes to cool enough to eat immediately. More if you’re icing it.

Now in more detail: Weigh some eggs. Let’s weigh three eggs as that makes about 20 or so fairy cakes or the chocolate layer of the above über-cake. Say that the weight was 200 grams. Now add 200 grams of sugar and clover to the mixing bowl. Beat (that is “stir hard and fast” like you want to give it babies) until these two ingredients are thoroughly mixed. Now prepare 200 grams of the self-raising flour in a separate bowl. Add one of your eggs and about a third of the flour to the existing mix and beat. Repeat until you are out of eggs and flour. If you were making a bigger cake, say a 4 egg cake, the you would add each egg with a quarter of the flour. See? Easy!

Then you can add “all sorts of shit” such as, say, four tablespoons of desiccated coconut or a couple of heaped teaspoons of cocoa powder or some ground almonds. Perhaps you might throw some vanilla essence in or half a teaspoon of green food colouring. The world is your oyster, although I wouldn’t recommend oysters.

Now put your cake into a cake tin. Put in the centre of a pre-heated oven and cook for “about 40 minutes” (but: for Fairy Cakes (non-poncy cup-cakes) 22-23 minutes will do ’em and it’s about one tablespoon of cake mix in each paper thingie). I say about because you will need to interact with your cake here. After half an hour or so, take the cake out and sliiiiide – not stab – a sharp knife into the middle. If the knife comes out covered in goo, the cake needs more time, so give it another five minutes and check again. Remember: be careful, you don’t want your cake to end up looking like Julius Caeser on the afternoon of the 15th March, 44BC. If it is still cooking after 50 minutes then you forgot to switch the oven on. 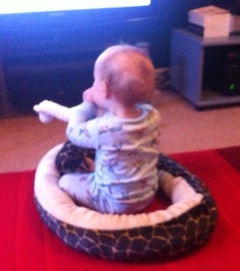 Baby Cobra helping in the best possible way by keeping snakes and giraffes away from the kitchen.

After cooking is complete allow the cake to cool at room temperature before icing it. I present two forms of icing here: chocolate death and simple water icing. I personally can’t stand butter based icing – I think it is too rich and weird. You wouldn’t spread butter on your ice cream so I don’t see what place it has, uncooked, on a cake. Still, you might disagree.

Of course you could also consider a jam filling and icing on top. Should you be doing this, then you’ll want to scale down the below recipe for chocolate death icing or it’ll be thicker than a house-brick. 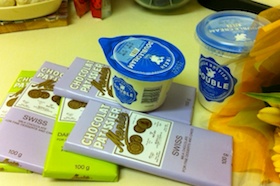 Just some of the artery clogging ingredients of the chocolate death icing.

You will need half a litre of double cream and about half a kilogram of cooking chocolate. For the cake above, Mrs Cobras and I used a fifty-fifty mix of plain and milk chocolate. Put the cream in a saucepan and heat until boiling. Turn down the heat until simmering and add the chocolate a bit at a time until it is all melted in. Take off the heat, put in a bowl and whisk the living daylights out of it for five minutes or so. Now let it cool until it’s super thick. This might take a few hours so feel free to accelerate the process using the ‘fridge. Finally, scoop the delicious, thick chocolate icing all over your cake. Finish up by sprinkling a crushed flake, mini-mars bars or Cadbury’s mini-Creme Eggs all over it. Phwoooooar!

(As an aside, we tried a cake that used white chocolate in this icing. It turned out awful. It’s like chewing on a stick of butter – it’s not recommended. Cake looked nice though, just tasted… lardy.)

A breeze to make. Your biggest problem will be misestimating the water requirements and as a result you are likely to end up making too much. Ingredients for this are: water, icing sugar (buy a kilogram, you’ll have some left for the next cake then) and some food colouring and perhaps vanilla essence. If you are really daring, you can replace some (or all) of the water with schnapps or some other highly alcoholic liquid. Put some icing sugar in a bowl, I have no idea how much, oh, say 200 grams. Add a bit of water, colouring and whatever and then mix up. It should be quite thick so if you added too much water, add some additional icing sugar and keep going. Going backwards and forwards between not enough and too much water should leave you with plenty of icing to do your cake. Top off with sprinkle thingies or large chunks of chocolate. 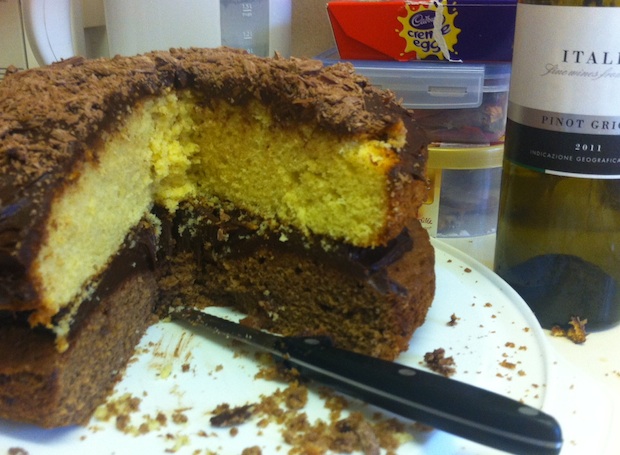 Serve with wine, enjoy, then jog 2 miles and double your five a day fruit allowance for a week.

Bakers, to your marks… Get set… COOK!

9 Responses to ‘Tis the season to eat chocolate: The Universal Cake Recipe