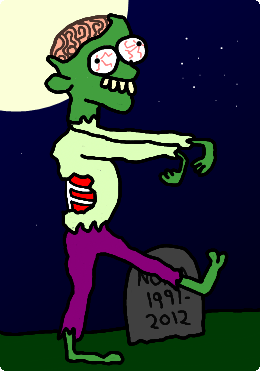 Zombie, here, is not looking for dogs. Dogs will be one of the great survivors of the zombie apocalypse. This is because they are spectacularly stupid. Years of domestication has selected for mindless obedience. The net result is that even the hungriest zombie would avoid dogs. Despite the risks associated with having delicious braiiiiins, we really, really don't want this to happen to us.

We all know that the zombie apocalypse is coming, but when, exactly? Well, if the movies are anything to go by, I would say quite soon. Indeed, if you can bear it, it probably makes sense to hang around teenagers as they seem to have the best plans for dealing with zombies shuffling around looking for delicious, succulent braiiiiiins to feast on. Assuming you survive the apocalypse then you will be wanting to get down to the serious business of rebuilding the human race. Where will you start? Obviously there will need to be an awful lot of sex to get the population growing again (something every nerd with a zombie apocalypse emergency rucksack is relying on) but there are considerably more practical issues to deal with, like fire, for example. Could you light a fire with nothing but two empty lighters to rub together? After the shops have been cleaned out, you are going to need to know some basics that the general population have been ill equipped to deal with for some decades now: a basic survival ability that is degrading rapidly.

I got thinking about this when I read Rome Sweet Rome on Reddit. Go read it now, it is a cool short story in which an entire battalion of modern marines ends up 2000 years back at the time of Augustus Caesar. Armed with Apache helicopters, armoured vehicles, rockets, guns and all sorts of other modern magic they could clearly wipe the floor with roman soldiers. Well, for a while, anyway, because all that incredible equipment is one fuel tank away from being utterly fucking useless. I was curious, what of today’s technology could I, personally, reproduce if I was one of the lucky few that survived the brain harvesting of a zombie apocalypse?

Fire, I can do. Half-arsed shelter I can do. And with fire, I can boil water, wash, drink safely and I can cook. Starvation will eventually allow me to kill animals for munching on so from a basic “ah, ah, ah, ah, stayin’ alive” perspective I think that I am ok. But what about electricity and all the wonderful benefits that it brings? What about antibiotics? Aspirin? Paracetamol? Cement? Could I make pottery and bricks? Could I refine oil? What about steel? Or iron, even. Do I even know what iron ore looks like? What about measuring temperature, making machines to move about in, assist with farming or press grapes? 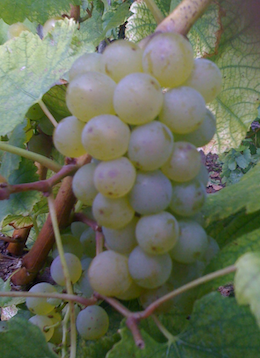 I drunk these grapes in their alcoholic form over a delicious dinner just months later.

In fact, on the subject of grapes, could I make wine? Yes, actually, I could, but that is thanks to Mrs Cobra’s parents showing me how. Without the rest of the modern kit and knowledge, though, it is pretty safe to say that my expected lifespan would take a plunge back to that of the late middle ages which probably means I would be living on borrowed time. At least I would have something nice to drink, though, whilst I made my own coffin.

We live longer and happier lives because of scientific development. Our knowledge has expanded and we have gradually done away with superstition and magic and moved towards learning about how the universe around us works and how to harness that knowledge. However, as science advances, the ability for the average person on the street to understand how everything actually works is decaying at a huge rate: the gap between what we use and our ability to comprehend it is growing. Nobody I know is going to be baking silicon and making their own microprocessors. Likewise, it is beyond all but a precious few minds to figure out how to make a modern car work if it breaks down. Twenty years ago, many blokes were capable of stripping down a car to the bone and putting it back together again1. Armed with a Haynes manual, every detail of car maintenance was within your grasp. These days, it is all one massively complex sealed unit with a million times more computing power than the US space program landed men on the moon with. There goes basic mechanics as a general skill that many people had.

Use the brain, Luke

The Internet age is robbing us of something else: the need and desire to have this knowledge either in our brains or written down on paper. Be it a zombie apocalypse, deadly virus, alien invasion, super volcano, massive asteroid strike or surprise dinosaur renaissance, as a survivor you will have to bootstrap humanity without Wikipedia to help you out. Today, the average group of survivors would be lucky to do better than a twelfth century lifestyle. However, thirty years back, it might have been the seventeenth or eighteenth century. Thirty years back from there the gap might have only been a hundred years, if that. Building radios, generating electricity, making pots and pans, creating and using metals, harnessing steam power and all the benefits from them was within the grasp of the average village sized group. With a few non-battery powered books (you know, the ones made of paper), the range of possibilities was even broader. Such understanding is important. Knowing how things work provides a better quality of life.

Modern times are turning us Joe Sixpacks into sheeplike users and operators, not creators, engineers, inventors, researchers and mechanics. We make nothing, but we use everything. Rest assured: your Facebook, web browsing and smart phone using skills have no value at all when you are a lone beacon of hope in a world ravished by brain nibbling zombies. I’ve moaned about this before from the perspective of computers and in the context of my hopes for the Raspberry Pi. Should they ever deal with the supply issues that will allow me to get my mitts on one I hope to find a device build around encouraging learning, building and tinkering that doesn’t frighten a new generation away by smothering them in a bible’s worth of API documentation before they can stick their name on the screen.

We are increasingly dependent on technologies that we do not understand. In turn, these technologies are dependent on other technologies that we also don’t understand, and so on. Your contact list and email are probably stored in a data centre in the states somewhere rather than in your head or on paper. This blog is served to you from an old bunker at Karlsruhe Baden-Baden airport in Germany. If “The Cloud” (which, let’s face it, is really 1960s terminal-mainframe architecture reinvented2) fails then you’re potentially screwed on at least nine levels.

Now, I am not some sort of Luddite. I love and have embraced the cloud, but I wouldn’t lend it my wallet, rattlesnake or kidneys. I would, though, allow my life to be enhanced by ensuring that my contacts, calendar and a whole bunch of important files are available to me anywhere on the globe where I have an Internet connection. I also love knowing that I can edit this document on several devices and it will automagically be up to date in seconds. Neat. But none of that stops me from taking responsibility for my own encrypted multi-site backups and you can rest assured that I carry hard copies of everything that really has value to me. In the near future a breakdown of either the Internet or your chosen cloud services could render you utterly stupid. Something to look forward to, eh?

A lack of understanding breeds dependency. It allows the few to control the lives of the many with increasing ease. Whilst most of us will never need to reinvent any of the fundamental technologies that we rely on for comfort and happiness, understanding the very basics of how they work is, I believe, critical to both maintaining our freedom and preventing magic and superstition from reasserting its position in our lives. Knowledge is, and will remain, power. Don’t let your little bit of that power vanish into the Internet.

–
1 But not me. I can barely change a light bulb.
2 This was a time when computers were real big and real expensive. Thus, many people used one bug computer from lots of dumb terminals that were merely screens and keyboards. Without the mainframe they were connected to, they were useless… which is how you might feel if everything you require is on the Internet and you have no Internet. In the meanwhile, your cloud service has your balls (or boobs, or balls and boobs) in their hands and your ability to work without them falls like a body into a mineshaft.

This entry was posted in Miscellaneous rubbish and tagged braiiiiins, cobra art, raspberry pi, the cloud, zombie. Bookmark the permalink.

7 Responses to The Zombie Apocalypse