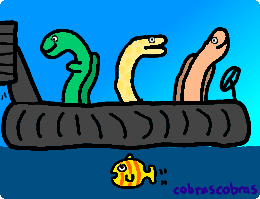 Eels! They're so cute!

And yours might be too, so you should get it checked. The perils of not knowing even the most basic structural components of a foreign language are considerably more embarrassing than eel related confusion.

There I was, standing on the platform at the station minding my own business and reading the paper. The train was moments away and I’d cleverly positioned myself exactly not where the large group of schoolgirls, their luggage and their teachers were. If the train hadn’t decided to be four carriages long as opposed to the eight I was expecting, I’d not have had to walk the few extra yards that positioned me in the same carriage as them.

It turned out that they were on the way to Paris on Eurostar. You’d assume that given that this was a cultural visit to support their French lessons that they’d have accumulated some knowledge of the language by now – they were, after all, teenagers. Given that I would describe my fluency as “hahahahahahahahahaha!”, the fact that I was in a position to correct them whilst they practiced supported my theory that the way languages are taught in schools is fundamentally flawed.

And thus begins a surprisingly long, even for the Cobras, polemic on bad teaching along with an introduction to the future tense…

Most of the girls were just tooling around with iPods, iPhones and whatnots but one had her list of key phrases and was working through them. She came to this phrase pretty near the top:

This means “what are you saying?” or “what do you mean?”. Literally translated, it is “what is it that you would like to say”. It is pronounced something like this:

If you want to get that right, google translate does a half-decent job.

Here’s how the girl laboured her way through it, and I mean laboured:

Now, forgive me for jumping to conclusions here, but CHRIST ON A BIKE. How, and let me say that again in bold, HOW is it possible to be learning French or going to France without knowing what “vous” means? And knowing Qu’est ce que? Ok, dire, “to say” is not one of the top-six verbs, but it’s certainly in the top ten. And, on top of this, the phrase is a basic stock phrase. Like “I don’t speak French”, “Do you speak English?”, “A glass of wine please” and “Why are you on strike this time?”. Sometimes I weep for the future of humanity. It is this kind of awful teaching that led me to getting a U grade in O-level German, well, that and the fact that I was bone idle at that age.

I had a good, old-fashioned moan about teaching methods last time and I expect I shall be moaning about it next time, too. For students to be interested, the subject matter must be interesting or taught in an engaging fashion. It wasn’t until I discovered the Michel Thomas CDs that I discovered that learning a language could actually be fun and entertaining. Other teaching methods I’ve experienced are a little like how I was taught tenses in school (back when dinosaurs roamed the streets and the moon was closer). Take the imperfect (incorrectly referred to as ‘the imperfect tense’, apparently) as an example. In my French lessons last year was taught the structure of the imperfect, how to built it from the verb and a bunch of French sentences containing it all in French. If I could understand grammatical details in French, I wouldn’t need the bloody lessons in the first place. Not once was I told what it was or given english examples of it in use (judging by their bail-out rates, their obsession with language immersion deprives many of the joy of speaking another language).

Maybe I’m abnormal, but I just don’t function without knowing what something is, when it would be used, why it would be used and here are some examples. Most language experts will be crying into their brandy right now thinking “how on earth can someone that old not know the imperfect” but here’s the cracker: You do not need to know what it is in order to use it. I’ve heard language-challenged teenagers manage it (although with more instances of the word ‘like’ than I would normally prefer to hear).

So, what is the imperfect? I was thinking of defining it now, but it will have to wait until next time when we are going to dwell on the past. This time, though, we’re looking into the future!

Here are three examples of the future:

The last one is not good english but is perfectly good French. It’s the reason why you hear French people who speak excellent English say “I call you tonight”. They know the other future tenses but in French, just using the present is perfectly fine. It’s all in the context and let’s face it, it’s not a confusing structure.

The other two require a brief visit from irregular pigeon. Firstly, let’s look at the first one. It’s the same in French as it is in English and it’s an absolute doddle to use. Think of it as “going into the future”. You just use the correct part of the verb “to go” and slap the whole verb (the infinitive) after it. The literal English of the eating example first:

So we’re going to need to know how to conjugate the verb “to go” (aller). “To go” is one of the nasty six irregulars. Along with “to have” (avoir), “to be” (etre), “to do” (faire), “to come” (venir) and “to be able to” (pouvoir, ‘to can’, as I remember it) it follows a weird pattern of oddness. As I said last time, it’s a definite case of following the Hitch Hiker’s Guide to the Galaxy’s advice: don’t panic. These six are pretty much the entire collection of oddities. I include “to go” and “to have” below as we’ll need the latter in three ticks:

And the verb to eat is “manger”. It’s a “regular ‘er’ verb” which means it shares its structure with over 9 out of 10 French verbs. So let’s try our future tense in French now:

Neat, eh? If you know the verb “to go” and the infinitive of the other verb, you can now go into the future:

You’ll almost certainly use this future tense more at first: it’s easy to construct and only requires deep knowledge of one verb in order to use it. However, there are times when you want to use the “will” future tense:

One or the other version just sounds right in different situations. Take Star Wars. When the emperor says “And now, young Skywalker, you will die. Fizzzzzzle fizzzzzzz zing crackle crackle fizzzzzzzzzzzzzz, etc….”, he’s chosen the correct future tense. The other two:

… just don’t have the right impact.

So how is it done then? In old French, this future tense was constructed like this:

That’s the subject, the infinitive of the verb then the correct matching conjugation of ‘to have’ for the subject. So, again in old French, the three examples above would be:

If you actually SAY that, French people will understand you completely. What happened as French developed was that the space between the infinitive and the to-have bit got absorbed creating a new version of the verb for the future tense that was the infinitive banged into the avoir conjugation so it ended up being:

For we and you:

This rai, ra, ron stuff is common to all French verbs for the future tense. Given that the French tend to focus on endings, you should now be able to recognise the future tense in use even if you do not recognise the verb: listen out for rai (pronounced ray), ra and ron. If you hear em, you are in the future. Here’s a brief handy table of these endings:

That is pretty much all there is to the future tense. As usual, there are a few special cases that would raise irregular pigeon’s eyebrows if only he had them and as usual they are the commonest verbs. To be, for example, doesn’t have the rai-ra-ron added to etre, it is added to se. E.g., je serai, nous serons. To have (avoir) has a base of au for the future and to go (aller) uses ir (this is the third of the three latin verbs from which the French ‘to go’ draws from).

Well, that is it for this time. Next time we’re going to look at negation: how to say sentences involving not, nothing, not any longer and never. Dead handy! We’re also going to look at pronunciation in French with some handy examples and rules so that you are able to get it at least roughly right!

Thanks, of course, go to Mrs Cobras for pointing out the various errors I made thus increasing this article’s accuracy from “what the fuh…?” to “acceptable, B+”