How is Darth Giraffe holding his light sabre? We may never know...

Itook my umbrella to London the other day in order to prevent it from raining. It was Mrs Cobra’s idea, she reminded me that Murphy’s Law means that if I don’t take it, I will end up more drenched than a drowning kitten. Likewise, in order to raise the temperature a few degrees I had the foresight to wear my winter jacket. Basically, I HAVE THE POWER! Muuuhahahahaha! Using nothing but the power of my mind, I molded the weather to sheer perfection. What is it that makes us believe that our actions affect the universe around us like that? Why should the presence of MY umbrella change the weather? What about the OTHER guy on the train who forgot his umbrella? Will an angry looking mini-cloud follow him around all day soaking him to the bones each time he steps outside?

We all seem to move through our lives believing that the force is strong in us: jumping in the bath will make the postman turn up with the parcel, ordering another pint will result in the delayed flight suddenly being “last call”, organising a BBQ will ensure that the hot weather breaks and the garden get watered, shaking the dice in a particular way will make a difference in the results… and it was that last one, the dice roll, that really got me thinking. I read a blog post where a chap called Juuso asked if he was a rational person for, as he put it, ‘putting effort’ into rolling a dice. I made a couple of comments but the whole thing vexed me (in a Khaaaaaaaaaaan! sort of way) for way too much time. I was chatting to some friends about the oddities in the brain that allowed us to believe that such rituals made any difference when one of them used a sentence involving the word ‘quantum’ – and we all know, when the word quantum is invoked, we’re all in deep trouble.

Let us take two silly examples. When I play Risk, Monopoly or Settlers of Catan I generally spend more time shaking the dice using my “secret method” than actually playing. And by “secret method” I mean just the right angles, length of time, chants and holding the cupped dice up to the side of my head just before finally rolling them. Needless to say, there is no statistical evidence to suggest that this works. Likewise, the time I invest gritting my teeth whilst shaking the scrabble letters bag… what the hell do I hope to achieve there? Am I hoping that the finer details of gravity will sort ‘heavy’ letters like M and W to the bottom whilst raising the ‘light’ ones like I and J to the top? Have I totally taken leave of my marbles? I am pretty sure I would have a cracking time explaining that to a shrink if I was stupid enough to ask one.

I potentially justified this by suggesting it is to do with the brain’s planning habit. We plan continuously: both forwards and backwards in time. After an event, for example, do you find yourself imagining how it might have turned out if you had done something different? Do you think “and if only I had said ‘and THAT was why the piano was missing it’s pedals’ it would have been brilliant”. Replaying and replaying events and imagining different outcomes to consider how one might approach it in the future appears to be normal. Then there is the future: considering the various outcomes of decisions that are about to be made. In the case of dice, though, the brain does not realise that such considerations are UTTERLY FUTILE…

Do we actually possess The Force?

Were they the droids that we were looking for, after all? 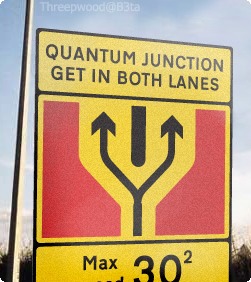 Ok, so it is not with mitoclockweights or whatever that stuff is in Star Wars, but do we actually influence the outcome of events MERELY BY OBSERVING THEM? Is there something amazing going on at a quantum level that we do not yet understand? And even if there is, will that understanding ever lead to an ability to control it? Who knows, but there is much for us to learn: as Richard Feynman said in 1965, “I think I can safely say that nobody understands quantum mechanics” and I think I can safely say that this is true today. The problem with observation changing the outcomes is that it would appear to be impossible to observe what would happen without the observation.

We may not know about observational influence on our day to day lives now, but we will: it is a foolish man who bets against scientific progress based on today’s perceived limitations and impossibilities. Suggesting in the mid 50s that one day, you would be able to fit ten thousand transistors onto something the size of a fingernail would, at best, have got you laughed out of the room or more likely denounced as a witch or bundled into the back of a nondescript white van for transport to a “more comfortable location”. In the end, Intel was slapping 30 million of ’em onto something that size in 2001 and the latest and greatest exceed a billion. Those that believe something to be impossible in their lifetime should agree not to use it should it be invented. It would suck to be that person if the invention was teleporters, anti-gravity, faster-than-light travel or immortality, eh?

Anyway, I’m off to confuse storm troopers looking for droids and Darth Giraffe is disturbed by your lack of faith, young blogreader.
This entry was posted in Miscellaneous rubbish and tagged cobra art, droids, giraffe, khaaaaaaaaaan!, quantum, the force. Bookmark the permalink.

8 Responses to That’s no moon!