For top secret work1 reasons I am learning a touch of C# at the moment. Normally, because it’s a Microsoft technology, you’d expect any knowledge you acquire to be transient due to their merciless and comprehensive deprecation strategy. This, as we all know, is a symptom of their chronic – and tragic – case of Shiny Box Syndrome. Shiny Box Syndrome is where the next great thing takes the current great thing out back and blows its brains out before leaving its decomposing body as a stark warning to those developers who’ve not yet had their knowledge and book collection wiped put before it even had a chance to gather dust. Still, long sentences aside, at least one can still shed tears of remembrance editing old Wikipedia articles. Oh, and the books, assuming that you’re stuck in the paper past2 like me, are great for propping up wobbly tables. You can also make a cracking set of stairs out of them for toddlers to climb onto tables, it turns out. Classic ASP, DirectX Reference and old Petzold books are all conveniently about step-size for little people.

Good grief. My artwork just gets worse and worse. Here is a book, a giraffe and a secret box containing secret things. Only the giraffe knows what’s in it and you don’t speak giraffe. Unlucky.

Shiny Box Syndrome occasionally spills through to the end-user with classics like everyone’s favourite, the Ribbon UI. With that, they made everything you knew about operating Microsoft products virtually worthless and at the same time introduced a UI that took so much of the average laptop’s screen height that you could barely fit “Dear Sir” into Microsoft Word before you needed to scroll the page. The coup de grâce, with Ribbon, though, was the way that it configured itself to move all the things you needed and wanted out of the way to places where they cannot be found. Ever. They called this “context sensitivity”. Genius.

Anyhoo, I digress and I am trying to have a more positive, cheery, up-beat attitude, despite the best efforts of the train, bus and telecommunications providers. C# seems to differ from a lot of Microsoft’s here-today-gone-tomorrow technologies in that it is actually a real standard and it’s used by all sorts of people! It’s also super-duper easy to learn for C++ programmers:

Despite the preconceptions I went in with, I quite like C# so far. It’s neat. Tidy. Safe. Not over-verbose. It’s like Java’s sexy sister who has Newton thoroughly puzzled. Oh, and it’s really quite a powerful programming language. However, the Internet, as we all know, contains too much material that’s even less useful than a Young Earth Creationalist’s account of human history. One tutorial, for example, contained so many “goto” statements in just one example function that I almost cried in despair. You need a licence to drive a car but having children and writing a tutorial for something you don’t fucking understand on the Internet are both free of restrictions. Great stuff. Thus, to help me when Stack Overflow is unavailable because my BT HomeHub has crashed again, I felt a damn good book was required. We all picked “C# 5.0: IN A NUTSHELL”. This book is huge. You can see it to scale with a poorly drawn giraffe and a container full of top-secret things above to get a feel for its size. 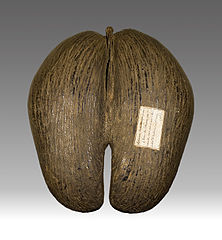 My goodness, it’s big enough to fit a C# book in, perhaps two!!

My friend and I were curious as to exactly what kind of nutshell this book was actually in having never seen a nut of sufficient magnitude before. Even more curiously, we were sober when we posed this question to ourselves. This book is, after all, big enough to beat people to death with and consists of well more than a thousand pages. And the font is small. Anyway, he used the internetamatubes and came up with the answer! Yes folks, it’s the Coco de Mer! Or, in a non-French version, the sea coconut. Wikipedia also claims it’s called a “love nut” but although I can see the resemblance with a heart if I squint, I’m sceptical that this isn’t just one of those “creative edits” we sometimes see and love. Also, of course, I simply can’t be bothered to do further research to confirm for sure, so we’ll share the mystery together.
-~-

Well, nut-fans, we’ll sign off with an exciting Coco de Mer fact care of our chums at Wikipedia: The largest one found was over 50 centimetres in diameter and weighed 42KG. This is large enough to contain several C# 5.0: IN A NUTSHELL books thus proving the title’s accuracy for at least a few more editions.

–
1 My work is, quite obviously, computer related. Someone I once worked for, who felt that paying things like “people” and “tax” are optional extras of being in business, apparently recently suggested I was in the potato slicing, chipping and serving business. His sources are awful and probably in jest. Mine, it appears, are now BBQ, tartare, tomato and vinegar.

2 In an ode to the 21st century, I finally purchased my first e-book the other day. I was talked into getting Hugh Howey’s “I, Zombie”. Wool, his previous book, is perhaps one of the greatest science fiction books of the century. “I, Zombie” reflects this quality of writing by striking almost constant horror into depths of your brain you were not sure you had. Be warned.