“What can be palpably more absurd and ridiculous than the prospect held out of locomotives travelling twice as fast as stagecoaches?”
– member of the public, early 19th century England

In 1823, Robert Stephenson and Company was formed with the purpose of constructing steam locomotives. It was a tough ride. Horse breeders, stagecoach manufacturers, land owners and those that thought that speeds exceeding 20mph were a “sin against nature” fought tooth and nail to shit in the wheels of progress and delay the inevitable as long as possible. Instead of changing their businesses and attitudes to work with the unfolding of new technologies they decided that the way they had always done business was the way that they should be allowed to do business forever. Needless to say, they ultimately failed. Of course, the only people to benefit from the iron road were absolutely bloody everyone else who had these benefits stalled, delayed and watered down for years by the minority self-interest brigade.

An “artist’s” impression of Stephenson’s Rocket, still in use today pulling the First Capital “Connect” germ express from London to Cambridge, although it’ll terminate at Hitchen due to points failure.

If driving the wrong way down the motorway of development sounds familiar, it is because 1) the only thing we have learnt from history is that we learn nothing at all from history and 2) large chunks of the recording industry believes that the comfortable way they worked in the 50s and 60s should, by all rights, be bequeathed to them for all eternity. The digital age and then the Internet changed this forever and those changes are unstoppable, despite their best efforts. Instead of embracing the opportunity to discover new ways of doing business they decided to push square pegs into round holes in order to protect their artist-exploiting, creatively accounted backsides. Indeed, never before has a supposed moral high ground been so far below the sea level of public opinion.

Of course you can’t simply stop the tide from coming in by standing in its way and saying “no, you naughty ocean, stay back, I tell you, stay back!”. Now that the recording and movie industry has resorted to full-scale and staggeringly mis-proportioned legal attacks on their customers in order to protect the past you know that they’re screwed: you can’t push people off a cliff and sue them for falling off cliffs. The fuckwittery and self-destruction orchestrated by the likes of the MPAA and RIAA would be unbelievable if it wasn’t actually happening. The entertainment industry will look very different in a decade or two’s time and what’s left will be those that figured out how to embrace and flow with, rather than against, the world becoming a smaller place. The results will be great. At last! I’m pretty sure that the collateral damage will barely be a footnote in a Wikipedia article: I’ll eat my hat if the collective tears shed about the old way of doing things filled an egg-cup.

What’s that coming over the hill? Is it a printer?

I would humbly suggest that the next massive change in the way we live our lives will be 3D printers. They will transform so many aspects of pretty much everything we do, every day, that you’ll wonder how on earth we survived without them. The Internet is young and yet there are now two generations of people who simply can’t imagine how they’d function if it wasn’t there (good luck in the zombie apocalypse!). Furthermore, I’d assert that few people will see the revolution coming until it’s on top of them and then there will a period of twenty years or so when many businesses affected by 3D printers resort to litigation in order to protect themselves from what will ultimately be an absolute slaughtering.

So what is a 3D printer? Well, simply put, you feed it a data file describing a 3D shape and it prints that shape, layer by layer, out of some stuff. Let’s say you want a spare part for a machine, a goblin for a game of D&D or that missing part of Lego: print it. What if the stuff was chocolate or one of a bazillion other materials? What if they could print things made of several different materials in all sorts of colours? Right now, 3D printers are either fiddly, flimsy DIY jobs that have pioneered 3D printing for anyone with the patience to assemble the device or tremendously expensive industrial solutions. They have limitations on materials, complexity and performance. But they all have something in common: they’re amazingly awesome. Awesome. It is as close as we’ll get to having Star Trek teleporters and replicators without discovering a whole new branch of physics: you want something? Download the 3D model data and print it. Jobbus dunnus, as they didn’t say in Roman times.

Leaping into a future of 3D printer ubiquity is a little like extrapolating a Ryanair European wallet shakedown from the Wright Brother’s first wobbly flight. Like computers in the 70s, outside of business, it’s currently only the brave, patient, curious or rich that are able to use these devices. Rapid prototyping in industry will never be the same but, despite RepRaps and other such efforts, 3D printers are simply not ready for the consumer market. But they will be. At some point, someone Apple-like will make the user experience as smooth as the results of a freshly executed hot wax: material cartridges that plug and play, integrated 3D scanner, multiple nozzle heads and multi-material printing, bomb-proof user interface coupled with a wonderfully simple method of accessing models to print, etc. Prices are falling, new entrants to the market are making them look more accessible but it’ll be a while before the curtains to wide-spread adoption are able to be drawn back.

Protected with a wall of lawyers

You can probably imagine the destruction already. Anything that can easily be printed but is currently a stable of Business X or Business Y is at risk: and that includes everything from luxury chocolate Rabbit sellers through Airfix style plastic model makers all the way to the mega companies like Lego. Think about it for even the shortest while and you’ll realise just how many of the things you buy right now could simply be printed. Cups, cutlery, buttons, shot glasses, a complete chess set, coasters, ornaments, sex-toys (admit it, it crossed your mind, right?), plates, candles or, for you blokes that never wish to feel the touch of a woman as long as you live, extra scrabble ‘K’s for a game of Klingon Scrabble. 3D printers will become an appliance in your home: something you just take for granted, like an oven, telly, Internet connection, toaster or kettle. 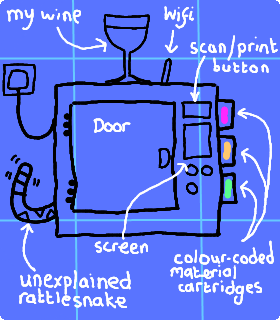 Those affected will have two solutions: 1) adapt or 2) die slowly in a rising sea of lawyers whilst their customers and revenue are stolen by others who understand that business models are generally transient properties of “now”. I predict a lot more “2” than “1” — and we’ll see the “2” losers cycle through the same, tedious anti-customer war that the entertainment industry has. DRM, for example. Shit schemes like Ultra Violet. Anti-piracy booklets and wrapping with everything that could be printed (the physical equivalent of the unskippable, soul-destroying rubbish that blights those of us that still buy DVDs and Blurays – as costed by Cliff Harris). We’ll endure deliberate “accidental” misinterpretations of laws to take down any web site offering 3D models for download that might look a bit like something someone has a copyright on if you squinted or slathered grease on your spectacles. Of course, there’ll be the hopeless efforts to convince you that you’re a criminal – even when you’re not – that gradually erode every possible avenue you have to live your life practically and still remain an honest customer. Finally, the “1”s tip the balance through innovative new business models, such as focussing on authenticity as a value added product extension, and the bright, new future demonstrates that survival of the fittest isn’t just confined to nature.

Then there are the new businesses that will be created. From the hardware to the materials to those supplying wonderful models of things you can print and all of the research and development that go into all of them. These are coupled with the business ideas that I simply can’t imagine at the moment that’ll be made possible with this technology. Those, though, will be for the entrepreneurs of tomorrow to discover.

3D printers are something special.

Like the Internet, it’ll go from nerdspace to everyspace in the blink of an eye. Your children, who already think you lived in the era of the dinosaurs to have survived without mobile phones and Facebook, will be baffled as to how life took place without them.

Whilst you won’t be able to order a hot tea in the way Captain Picard did, there’s a generation of people around the corner who’ll grow up with technologies that are barely even science fiction today.

–
UPDATE: Oh my! Now THIS is what we’re talking about. Cubify: looks friendly, has cartridges for materials, easy to use. Found it today – the start of the revolution is now.