“If people had understood how patents would be granted when most of today’s ideas were invented, and had taken out patents, the industry would be at a complete standstill today.”
– Bill Gates, Challenges and Strategy Memo, 16 May 1991
“[…] It was a cold war, stockpiling patents instead of nuclear arms, and every company in the valley had a bunker full of them.”
– Andy Baio, who sold Upcoming.org to Yahoo!

Maybe you’ve heard about the whole Patent Troll thing. If not, allow me to illuminate you with a poor man’s abstract of what’s going down. I won’t name names just in case one of the leeches has a patent on “a method for naming names and then having a good old moan about those names”. A patent troll doesn’t actually invent anything. Instead, they buy up patents from other people, preferably broad obvious ones issued by the USPO, and then sue the fucking socks off anyone they can in courts that are particularly friendly to this kind of insidious lawsuit (east Texas, I’m looking at you). In many cases their ownership is obfuscated to prevent anyone from easily figuring out who’s ultimately pulling the strings and making the money and they’re a fantastic tax avoidance wheeze, apparently. 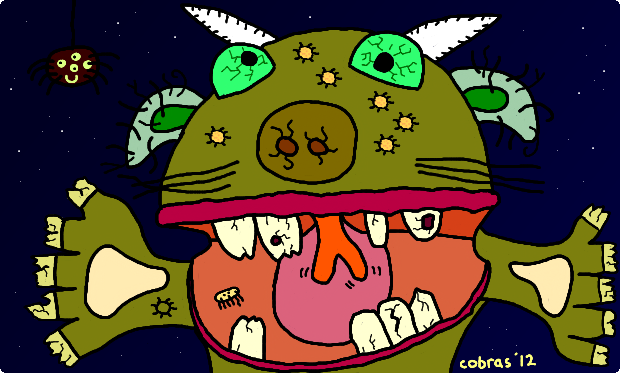 A patent troll, yesterday: Acquire, weaponise, sue.
(Any resemblance to a Gruffalo is strictly coincidental)

The waters are muddied by the fact that many of these patents are wide-ranging, broad and “bloody obvious” rather than the specific, legitimate inventions that the patent system was created to protect. There are so many of them, particularly in software, that no human being – especially the little guys – can possibly hope to check the entire smorgasbord for potential infringements. It has got to the stage that regardless of intent, it is getting harder to innovate anywhere without accidentally infringing on someone’s so-called “invention”.

Here is how it worked in one recent case. You, a small individual developer are sued: defend in court or pay a fee to make the problem go away1. You cannot afford lawyers. Thus, you must cave wholesale because in the absence of being able to defend yourself adequately you may may end up losing whether you are right or wrong. The patent troll goes for hundreds of individuals knowing that most will surrender without a fight making the process a licence to print money. Each settlement comes with an NDA so the whole thing is neatly kept quiet. Larger companies will often simply settle because it is cheaper to do so than it is to defend, regardless of whether they believe that they have infringed or not. The patent isn’t tested and each person paying up just supports the process further. Without vast quantities of cash and superb lawyers, it is simply not worth defending because should you lose, you will have to pay the legal costs. They have expensive lawyers. Your life is now over. This is not about right or wrong. It is about one of the dark sides of capitalism, full-stop. It is sad that we tolerate this suffocation of ideas in our daily lives. Needless to say, I do not believe this to be a case of protecting innovation, it is simple legalised extortion.

“The only thing holding back this form of innovation is the billion dollar price of patents these days. This speaks miles to the power of getting the tools of innovation into the hands of many and the sad state of our current patent system. The only thing that holds back the next Steve Jobs is being sued by the company started by the late Steve Jobs.”
– Jim Zemlin

Other than holding innocent individuals upside down and shaking them until their pockets are empty, another terrifying development that is set to affect the future of all technology development is the lawsuit war that is in full swing in the smartphone market. These days, all I seem to read about is who is plotting injunctions against who over some broad bloody obvious patent that has more prior art than shitting and eating. Quite why the US patent office, in particular, seem to be asleep at the wheel whilst this patent land-grab is taking place is anyone’s guess but we will all be paying the price for decades to come for allowing corporations to engage in this global fight to the death. The front line is the cutting edge of innovation and the only winner is the legal profession who are collecting enough cash to sink five battleships before breakfast and then sink the breakfast, which is a shame, because it involved bacon and I like bacon.

An effective patent system is, I believe, a fundamental cornerstone of a free-market economy’s long-term viability and growth. Research is risky. It takes time and money and does not always deliver results. Without a mechanism for protecting the intellectual properties that result there is little incentive to invent and innovate and economic development is dragged to a snail’s pace. The key word, though, was effective. The granting of questionable patents and a new business model that revolves around accumulating and enforcing a portfolio of them is not what IP protection law was created to achieve. It was created to nurture an environment of invention and innovation over mere exploitation.

Still, none of this affects you, right? Firstly, it might in ways you cannot imagine: the guy or girl in their bedroom plotting something wonderful that could transform your life could very well have it murdered before it is born. But you will never know about that, so who cares? Storm in a teacup, eh? Well, I would have drawn a storm in a teacup so that you can see just how serious it can be but it’s much harder than simply talking about it. So I didn’t. But in the meanwhile, I urge you to read this. It is a work of fiction that could very well represent just how miserable our daily lives might become in a precious few years from now.

Alongside ambulance chasers, payday loan companies and First Capital Connect, there is a special place in hell reserved for the people perpetrating these fights. When the threat of lawsuits sucks the will to innovate, invent, discover and create out of the world then it will be a poorer place. The patent system is broken. It is being exploited five ways to Sunday for shady revenue generation. When we are spending more time litigating than innovating, our focus is clearly on the wrong ‘ting.

(Update: The patent trolls don’t always win. I found this TED talk after writing this article. It is super-fun to watch.)
–
1 It’s not dissimilar to the scam operated by some law firms going after possible file-sharers. Enjoy Bob Reid’s TED talk for a fine commentary on that particular situation.

4 Responses to P P P Pick up a patent (portfolio)