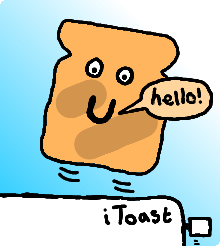 Friendly toast won't be smiling when you start eating him alive. How COULD you?

What do you know the BlackBerry chaps for? What’s that? As industry leaders in secure mobile e-mail solutions you say? Absolutely. So, if YOU were RIM and you were releasing a tablet computer thingie to compete with the iPad, what one feature would you make sure was a) present and b) industry leading? E-mail perhaps? A contacts application to go with it, maybe? No, those in charge have decided not to bother with an e-mail client or a contacts application for the time being because, after all, they’re just not important in a tablet device. Amazingly, their co-CEO managed to say this with a straight face shortly before riding off into the sunset on a magic unicorn:

“This is superior, it’s far more portable, it’s lighter in your hands, you can hold it for longer.” [Bloomberg]

Honestly, it’s absolutely hysterical watching so called innovators trip over themselves to make bad copies of Apple’s iPad. It’s like car-crash television without the car crash. Or the television. The catch-up approach to forging ahead is always going to leave you behind and not in a sexy surprise cuddle opportunity sort of way. If these guys and those at Samsung are the best that the competition can come up with then frankly, Apple could ship a touch sensitive piece of toast and still be market leaders. Hmmmmmm, toast… munch munch munch.

(PS: They also didn’t feel a calendar application was useful, so skipped that too.)
This entry was posted in Miscellaneous rubbish and tagged cobra art, pointless observation, uninformed opinion. Bookmark the permalink.

One Response to PlayBook: Hahahahaha!