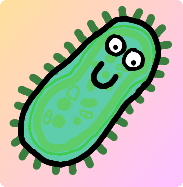 What sort of germ is this?

Never before in the history of mankind has one privately owned company with such little accountability been in possession of so much personal data about so many people. It always seemed odd to me that the population of this country fought so valiantly to protect their personal privacy when it came to national ID cards where the government would have collected a tiny, minuscule fraction of the data that Facebook collects every day. For this, and a bunch of other illogical reasons, I’ve managed to avoid Facebook so far in an “electricity? That’ll never catch on” kind of way. My only foray into social networking to date has been the whopping failure that was Twitter. In the months since I created my Twitter account I have accumulated a pride-busting zero followers and have made eight tedious tweets. Eight. Basically, I suck at social networking in the virtual world. Fortunately I’m better at it in Real LifeTM or I’d be really screwed.

Still, that didn’t stop me getting all enthusiastic when a friend sent me an invite for Google+. Google+’s tagline ought to be “It’s not Facebook!”. I kinda hope that it has a degree of success: the monopoly that Facebook has is not good for innovation and it is hard for them to be incentivised to make even the slightest effort on the privacy front when they have absolutely no competition whatsoever.

It is possible, though, that this is an exercise in pushing water uphill for Google. Part of the genius that initially helped the growth of Facebook was the total domination of the Ivy League colleges in the states one at a time. Arrive, assimilate, move on. This alone had two mammoth benefits for Facebook: 1) it created an irresistible target for advertising because everyone in one place could be hit at one go and 2) it made it impossible not to be on Facebook otherwise your social life would be shot. Then, of course, there are those silly apps. I may look down my nose at them, but they are enormously profitable and they provide rich, social entertainment for hundreds of millions of people. They also add a valuable double meaning to the word social in social network: it is a network of those in your social life and a network upon which you socialise.

Google has a lot of work to do to establish a foothold because their growth is not nearly as smartly and as sneakily presented as Facebook’s and they are going to have to have some outstanding special features to tempt people to move to them (circles, incidentally, which allows you to organise your contacts according to who you want to expose what to may well be their killer feature so far – comprehendible, easy to use, multi-layered privacy). There is a risk that Google+ will be like many of the nerd parties I either organised or attended when I was a teenager: four blokes holding a beer can waiting for the girls to turn up and THEY NEVER DID. It may be easier for Facebook to just observe the cool things that Google+ does and then copy them into their social network promptly, as, of course, they are already doing, albeit on a smaller, less refined scale. It’s going to be tough to keep tempting people to give their time to grow it to critical mass: many people on Facebook are there because everyone else is. It is not necessarily an attractive proposition to try and create another social network somewhere else. Those that are also on Twitter or LinkedIn may sigh at Google+ and say to themselves “when your service prints money, pours wine and itches my balls, then and only then will I go through the kerfuffle of setting up yet another way of piddling my time down the drain.” Being “Not Facebook” may just not be enough. It is pretty safe to say that The Zuckerborg is not wearing the brown trousers of concern JUST yet, but time will tell.

Anyhoo, to cut a long story short, I showed appropriate hypocrisy and joined Google+. And so far, I’ve had considerably more success than my efforts with Twitter. I have one friend1! But these are early days. I’m planning on building on this one friend to see if I can whip together a few, so I’ve cheated by sending invites out to a few people I know in the hope that I can construct one of these googley circle thingies. In the meanwhile, I’m sure I’ll have a blast. I picked The Germs to use as my profile picture. Yey for the germs!

–
1Now three friends in the time it took to write this. Of course, I’ll keep quite about what length that time was so that it looks impressive.
This entry was posted in Miscellaneous rubbish and tagged brown trousers of concern, cobra art, Facebook, germs, Google+, twitter. Bookmark the permalink.