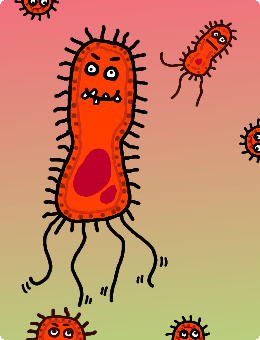 He's moved out from our place leaving us with just the usual rivers of Baby Cobra bogies.

Germs, germs, germs. The Cobra family have had so many of them this year that we were beginning to think that we had value to medical research. Of course, we blame Baby Cobra: she is a germ magnet. A cute one, but a magnet for microbes nonetheless.

The latest round of infections have attacked first Baby Cobra, then me, then Mrs Cobras, then me again and then Mrs Cobras for a second time. All in the last eight weeks. And all symptoms starting, Mrs Cobras observed, on a Tuesday. Clearly, this germ carries a calendar as well as a selection of nasty symptoms. It’s best that I describe the symptoms with a picture rather than words to avoid further misclassification of this web site (you should see how many people find me because their hovercraft is apparently full of eels):

Even with MY artwork, this should be obvious... oh, and the first two often happen simultaneously.

We have an official name for this germ: Tuesdicoccus Daylori. We feel that it is appropriate. As much as we hate this particular miniature misery machine, we have come to know it and we feel that it has come to know us, too. A sort of human-germ relationship that works on the basis that symptoms won’t kick off, say, at 8PM when boarding a Ryanair flight from Germany, but will start once we are safely home and the heating is on. For that ALONE, Tuesdicoccus gets a tickle of thanks. However, as much as we appreciate the infection-delay that allowed us to survive a packed flight with an eleven month old baby, we’re done now.

So, please Mr Daylori and your millions of little brothers and sisters, it has been interesting and slimming, but can you move out now? I’ve packed your suitcases for you.